From Stars to Cars – Why Not Cardiac Care? 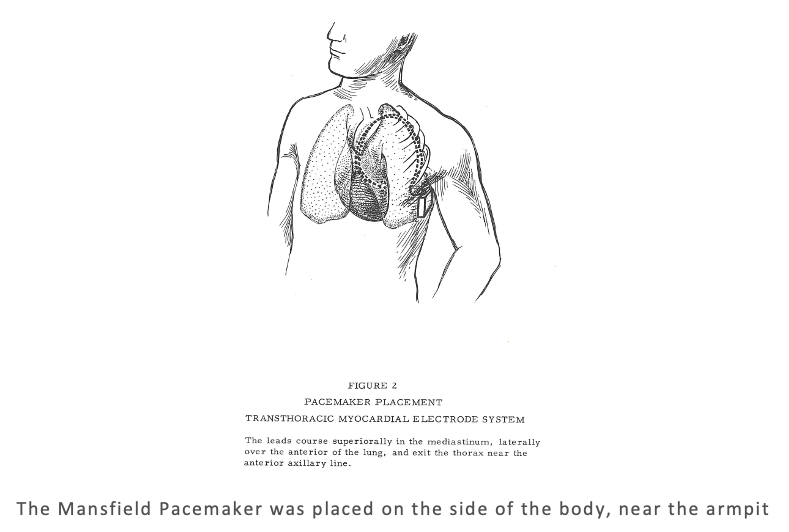 Adcole Corporation began in 1957, under the leadership of the late Addison Cole.

In addition to his facile mind for overcoming engineering challenges, Cole also had a nose for sniffing out a good opportunity. From the space race to automobile manufacturing, the Adcole Corporation availed itself of opportunities ranging from sun sensors to metrology gages — including an attempt at breaking into the cardiac care marketplace.

Not unlike the strict requirements-based applications that Adcole manufactured for the aerospace and automotive markets, cardiac care — specifically cardiac devices — is a highly regulated industry. When Dr. Peter B. Mansfield of Children’s Hospital Boston approached Addison Cole in 1963 about developing a pacemaker device, the challenge and the opportunity must have electrified Cole and his design team.

The challenges were steep. Generations of doctors and engineers had sought to develop a reliable, robust pacemaker. In addition, the first battery operated wearable pacemaker was released in 1957 (by Medtronic, Inc.), meaning that while the market was new, it was not entirely a green space. The new design, developed in collaboration with Dr. Mansfield would provide a solution to these problems:

After several years of development, the product had been developed enough to announce to the world that it was ready for use in patients. In August 1968, the “Mansfield” Cardiac Pacemaker and Electrode System was released, complete with an installation guide. On page one, the document boldly claims that the new design offers the solution to reliability, miniaturization, and efficient battery use.

It is important to mention that the genesis of the Adcole Corporation was to provide solutions for the Space Race. Very early in the massive undertaking that became sending an astronaut to walk on the moon, Addison Cole lent his substantial engineering gifts and manufacturing know-how to develop technologies that would be integral to keeping spacecraft on course after leaving the earth’s atmosphere. As such, it is no surprise that the literature about the product cites the NASA standard of quality and reliability.

The Mansfield Cardiac Pacemaker featured direct myocardial electrodes. This was considered a substantial differentiator for the pacemaker. The product manual states: “The electrode wires are connected to the electronics unit by a specially designed nylon connector rather than being an integral part of the unit”. Featuring twin electrode geometry, the Endocardial Catheter Electrode was a unipolar system that provided the means to regulate the patient’s pulse.

Since this product is a pacemaker, a key aspect to the system lies in how it regulates the patient’s pulse. The Pulse Generator provided electronics hermitically sealed in a stainless steel can. This container was not small: 4.4 cm  x 4.6 cm x 1.1 cm and weighed 73 grams. It used a 1.5 V mercury cell and was engineered to deliver 60-90 beats per minute as a pulse rate. The case was a source of pride; the manual states that it is a type 304 welded case that has glass to metal seals to provide leakproof performance and electrical feed-through.

Surgeons looking to install a Mansfield Pacemaker had a tricky task facing them. The unit was placed in the body, just under the armpit. The leads go over and around the ribs outside the lungs, which ultimately are routed down to the heart via the thorax. As one would expect, the guide provides a very detailed account of how to surgically install the unit in the patient. The level of detail extends to the recommended knot for the electrodes (it recommends a square knot).

Some of the subjects covered in the manual include:

As one would expect, care and maintenance of the Mansfield Pacemaker were considered in depth. Power unit replacement was a subject of great importance and the surgical procedure was addressed in this way: “Delicate dissection is required to prevent injury to those electrode leads as they leave the tapered section of the connector”.

True to the professional affiliation of Dr. Peter Mansfield as a doctor at the famed Children’s Hospital Medical Center in Boston, MA, the team of Cole and Mansfield addressed pediatric cardiac care, too. Before the Mansfield Pacemaker was launched, the duo had released a paper in 1963 called The Design and Analysis of Myocardial Electrodes: Implantable Pacemaker for Infants and Children.

Unfortunately, there is no record of what became of this early attempt at engineering and manufacturing a cardiac pacemaker. Addison Cole passed away in January of 2018 at the age of 98. And although many of his employees have enjoyed long careers at the Adcole Corporation, none are currently employed from the 1960s and 1970s. Even so, one has to admire a man whose engineering acumen spanned stars (Aerospace) to cars (Gaging technologies), plus a major effort to create products for the burgeoning pacemaker segment. But for a man whose company’s tagline was Trusted Accuracy, one would expect nothing less.