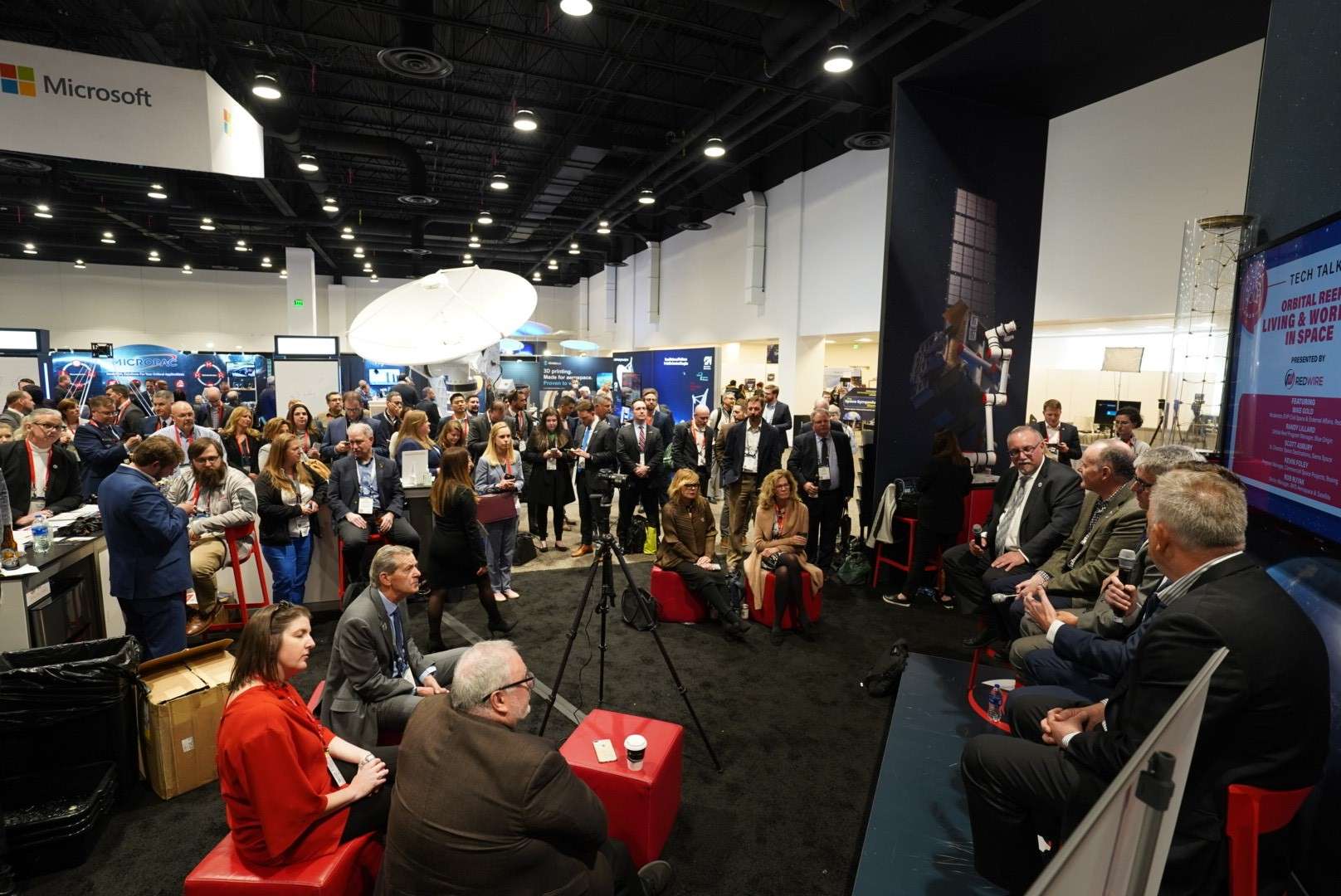 The day started with Redwire’s Senior Brand Manager, Tere Riley, participating in the Teacher Liaison BreakSTEMfast. She signed copies of The Epic Mentor Guide, a book that features her as a mentor for educators and students. The event was sponsored by the ISS National Laboratory.

“The low hanging fruit for the Space Force is putting SSA cameras on every satellite to provide ubiquitous awareness to understand what’s going on in space domain so that our guardians have actionable intelligence to make decisions at the speed of need,” said Bellamy when discussing the topic of space situational awareness.

Redwire’s Executive Vice President of Civil Space Business Development, Mike Gold, highlighted Orbital Reef this morning at the Boeing booth with partners Boeing and Sierra Space. The participants discussed how space science not only matters for life on Earth but also for future space explorers.

“We have been fortunate to be able to outfit the International Space Station for 50 years with research and materials processing and we’re looking forward to extending that expertise to future commercial space stations, the Moon, Mars and beyond,” said Tadros.

This evening, Redwire hosted a happy hour and tech talk on the Orbital Reef project, specifically the future of living and working in space. Executive Vice President of Civil Space Business Development at Redwire, Mike Gold, moderated this topic with the Orbital Reef Program Manager at Blue Origin, Randy Lillard, Sr. Director of Space Destinations and Orbital Reef Program Manager at Sierra Space, Scott Asbury, and Program Manager of Commercial Space Projects at Boeing, Kevin Foley. They discussed the importance of Commercial Space Stations and how the team plans to work with both NASA and the private sector.

“I have always believed that the International Space Station (ISS) should get a Nobel Peace Prize because we take for granted that there was a space station built by an international coalition with people from all over the world,” Gold mused in the tech talk, discussing the legacy of the ISS. “It has a tremendous legacy and one that we are going to honor because the Orbital Reef team will not allow that flame lit by the ISS to be extinguished, and will work to keep a continuous human presence in low Earth orbit for America and its partners.”

The talk highlighted some of the proven technological advancements that have occurred and what is to be expected of private and NASA astronauts living and working at Orbital Reef.

The Redwire team also sponsored a reception at Cheyenne Mountain Resort with Space Generation Advisory Council (SGAC), Euroconsult and Space Foundation this evening, where Redwire CEO Peter Cannito spoke about Redwire’s heritage and innovation. “At Redwire we are honoring the heritage of space while also bringing in new ideas and innovative thinking,” Cannito said at the reception.

Redwire will be hosting one more in-booth tech talk to close out Space Symposium. Tomorrow, head to Redwire’s booth or tune in to the livestream to hear about future space architectures. The tech talk will be livestreamed across Redwire’s social media channels. See more details below:

Stop by the Redwire Booth on the final day of Space Symposium to check out the featured technology and tech talk, or follow Redwire on Twitter, LinkedIn, and Facebook for daily updates and to watch the tech talk live.

You can also check out the full schedule of events on our website.