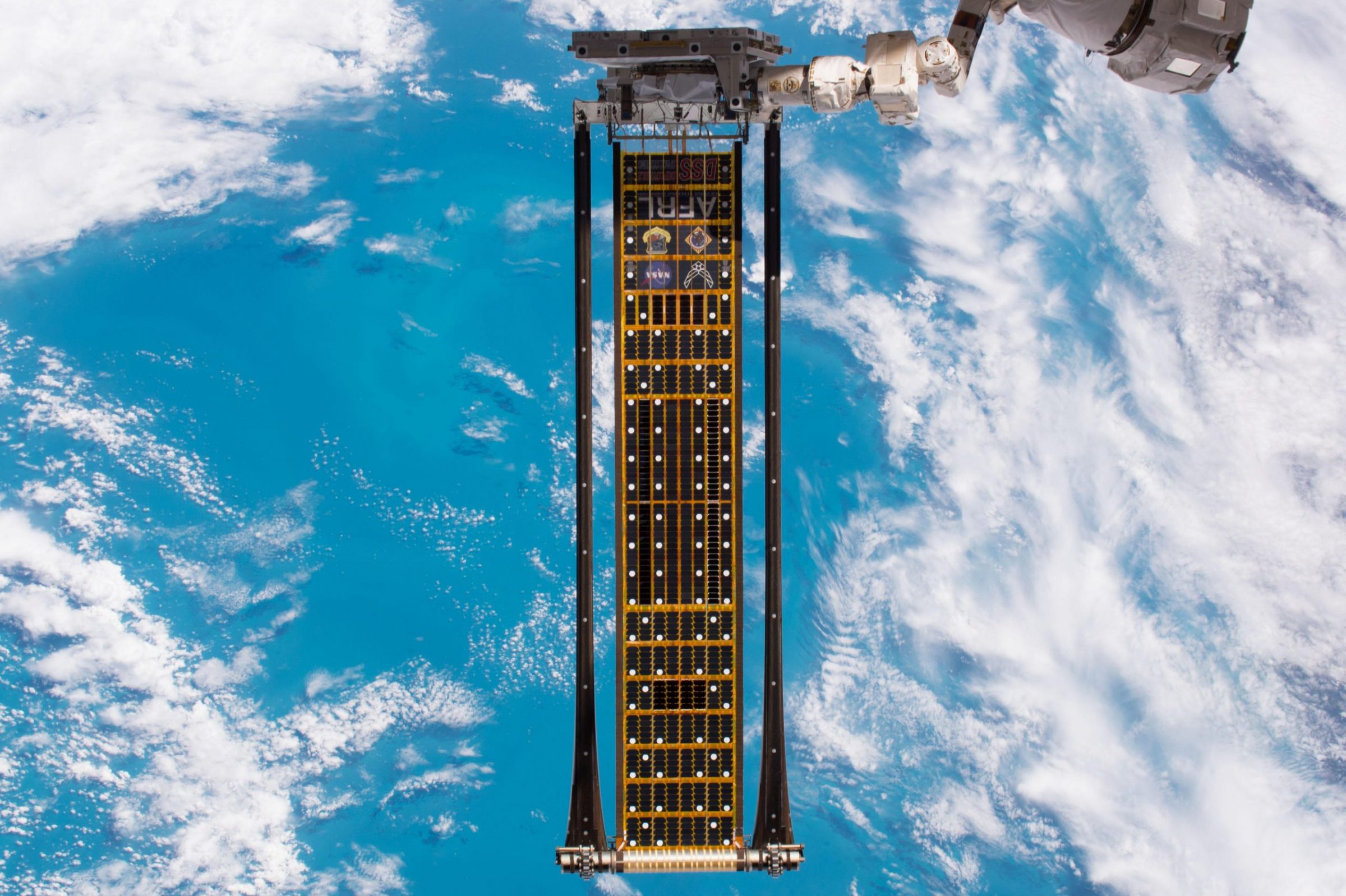 Deployable Space Systems, Inc. (DSS) of Santa Barbara CA, announces the successful deployment in space of their Roll Out Solar Array (ROSA).  The nominal flight solar array deployment was completed from the International Space Station (ISS) at 1:45 AM EST Sunday June 18th, 2017, as part of a 7-day long flight experiment of the ROSA technology now being performed on ISS (Figure 1).

The ROSA technology developed by DSS is a new and innovative mission-enabling rolled flexible blanket solar array system that offers greatly improved performance over state-of-the-art rigid panel solar arrays, as well as greater affordability for use on future NASA, DoD and commercial space missions. The DSS ROSA deployable array features an innovative “roll out” design which uses composite booms to serve as both the primary structural element and the deployment actuator. The stored strain energy of the booms enforces the unrolling deployment actuation, and when fully deployed the rigid booms provide the array’s structural stiffness and strength.

The solar array, when configured for launch, stows into a compact cylindrical volume. The unique ROSA configuration is able to allow extremely large solar array deployed areas to be stowed very compactly for packaging within launch vehicles because its solar cells are mounted on an innovative rollable flexible blanket which is much thinner than the traditional rigid panels in current use.

The ISS-based flight experiment hardware (shown in Figure 2) including the flight ROSA wing designed and built by DSS, was launched to the ISS on June 3, 2017 on SpaceX Dragon/Falcon-9 CRS-11 (Commercial Resupply Services-11), and was funded primarily by the U.S. Air Force (Mission Patch shown in Figure 3).  The flight experiment is designed to characterize the deployment and structural/electrical performance of the ROSA in a relevant combined space environment to compare to scalable model predictions and on-ground test data.

ROSA was stowed in the trunk of the SpaceX’s Dragon capsule during launch. Once on orbit, and when ROSA operations were ready to begin Saturday afternoon, the ROSA experiment was picked up by the ISS robotics arm, extracted from the Dragon trunk and located in its operations location (Figure 4). Once deployment was completed early Sunday morning, the subsequent ROSA experiment operations will be conducted while attached to the robotic arm for a duration of 7 days. During initial deployment of the array, video was taken from multiple vantage points on ISS. In-flight data will be recorded using embedded sensors on the experiment. Testing is activated and commanded via the ground controllers located at NASA Johnson Space Center (JSC) in Houston.