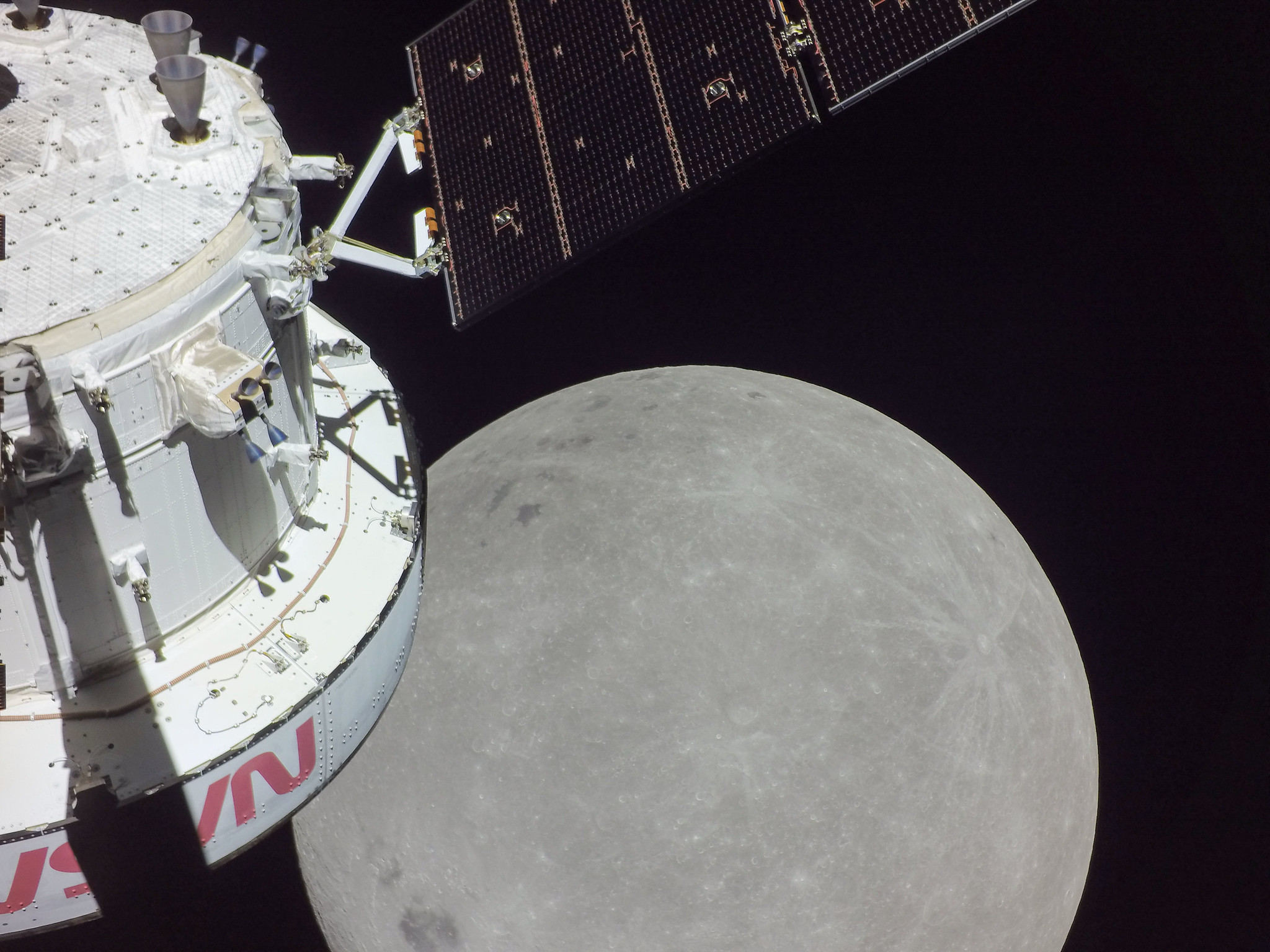 The awe-inducing views being captured on this mission are enabled by the Orion Camera System, developed by Redwire in partnership with Lockheed Martin. The camera system is an array of 11 internal and external inspection and navigation cameras developed specifically for the Orion spacecraft. As the “eyes” of Orion, the Orion Camera System is enabling advanced vehicle imaging capability for Orion and the Artemis I mission.

The cameras are performing nominally and the Redwire team supporting this historic mission in Mission Control Center at NASA’s Johnson Space Center in Houston, Texas, and NASA has been able to live stream views from the solar array wing cameras to the public throughout the mission.

“So far the camera system’s performance has been outstanding,” said Matthew Allen, Redwire Orion Technical Lead for Mission Integration & Flight Operations. “Huge kudos to the entire Redwire camera team as well. We are actively using the cameras both for public outreach and real mission operations.”

As Orion was orbiting Earth shortly after launch, one of the four wireless cameras on the top of the solar array wings, known as the “SAW cameras” captured these images of the spacecraft and Earth, as well as this video of Orion leaving Earth:

This black and white portrait of Earth was captured with the optical navigation camera (or “OpNav”), located towards the side of the spacecraft. This camera provides data to controllers for machine vision processing to support spacecraft navigation, like Orion’s position and velocity relative to Earth, by capturing imagery of Earth and the Moon at different phases and distances. This capability could be key for deep space missions to determine a spacecraft’s position in differing lighting conditions. 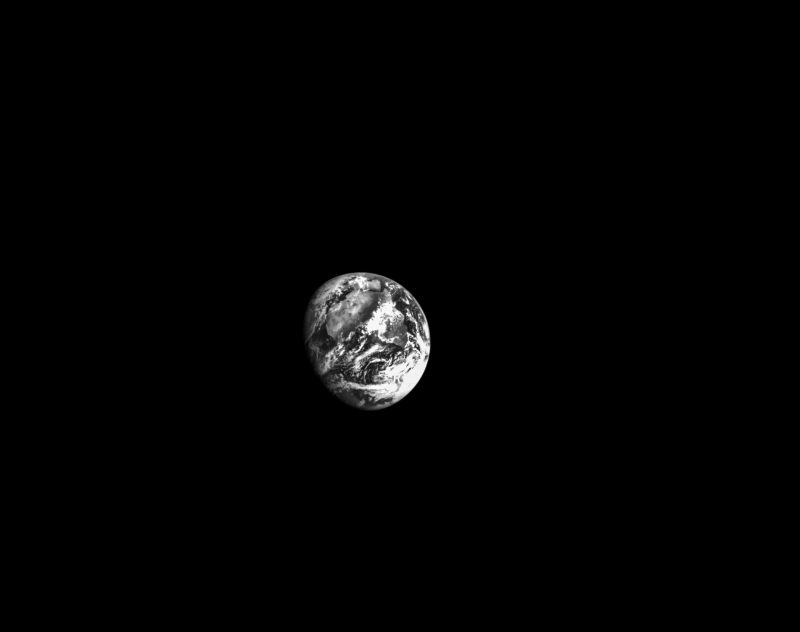 But first, let us take a selfie, Flight Day Four

An important capability for the SAW cameras is to take spacecraft “selfies.” This capability allows the engineering team to assess how the spacecraft is performing on its first journey into space and to visually detect any challenges.

An Inside Look, Flight Day Five

In order to view the Callisto payload, the internal cameras inside Orion were activated to capture the image below. The camera is mounted to the spacecraft behind the uncrewed “pilot’s seat” and provides a full view of the cockpit. 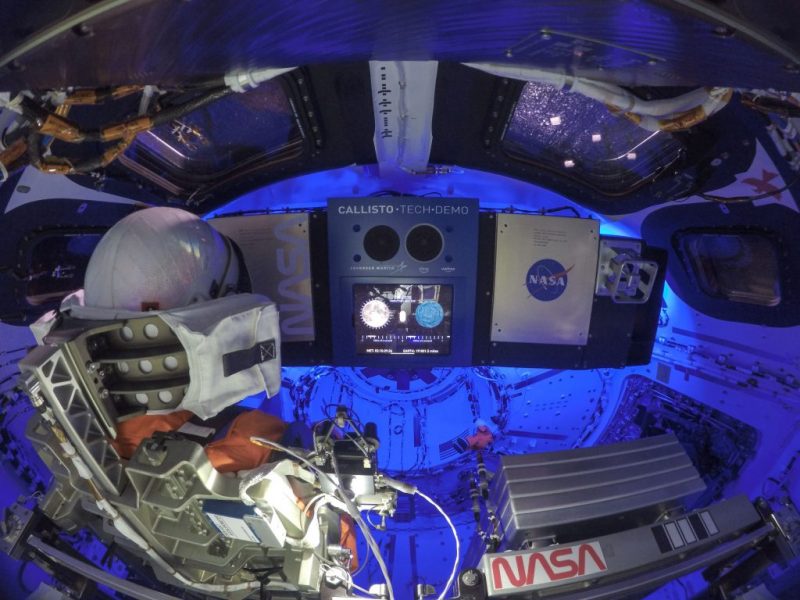 When the Orion spacecraft started its closest fly-by of the Moon, it captured these images using one of the four SAW cameras onboard. The darkest spot visible on the Moon is the Mare Orientale.

After its close lunar fly-by, a one of the four SAW cameras onboard Orion captured the spacecraft and a crescent Moon as it continued toward distant retrograde orbit.

Orion Looks Back at the Moon and Earth, Flight Day Nine

Enroute to a distant retrograde orbit around the Moon, a SAW camera captured this imagery of a crescent Moon and Earth.

On flight day ten, the OpNav camera captured this image of the crescent Moon as it headed towards a distant retrograde orbit. 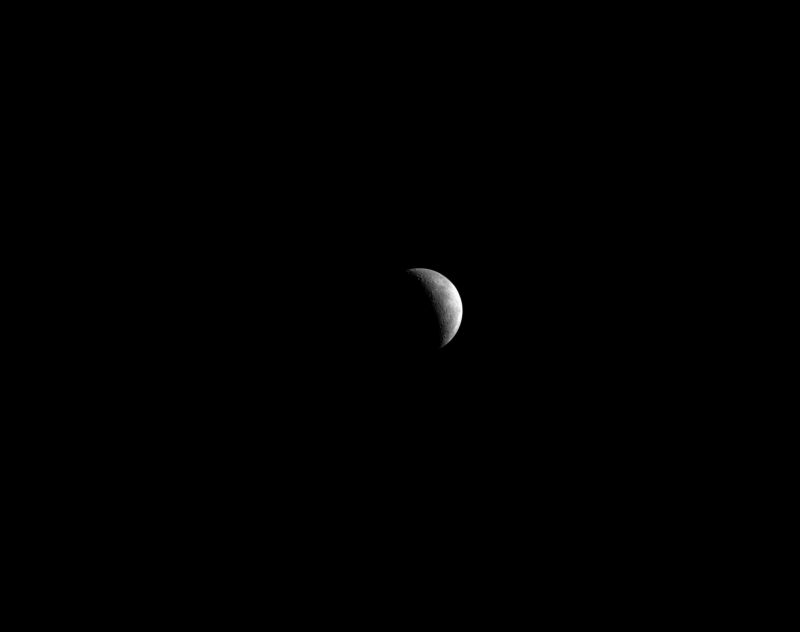 The same day, one of the four SAW Cameras captured this image of the Earth as it headed towards a distant retrograde orbit. 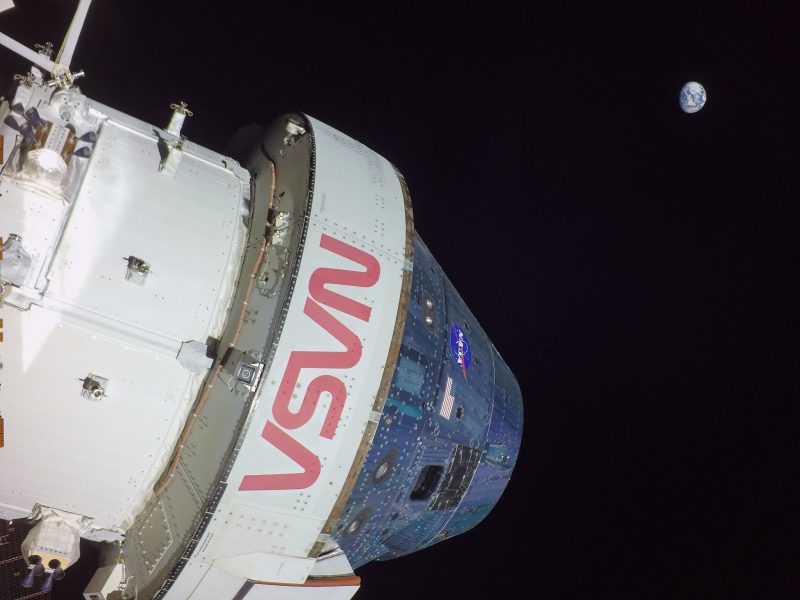 Inside the Orion spacecraft is the Callisto payload, a technology demonstration by Lockheed Martin in collaboration with Amazon and Cisco to test voice-activated and video technology, which could assist future astronauts on deep space missions.

To view the Callisto payload, the internal cameras mounted inside Orion were activated and provide a full view of the cockpit. Mission control also has capabilities to change the color of lights inside the spacecraft, seen below in green and orange on flight day twelve.

The Orion spacecraft set a new record for the farthest distance traveled by a spacecraft designed for humans after it reached its maximum distance from Earth at 268,563 miles on Nov. 28. 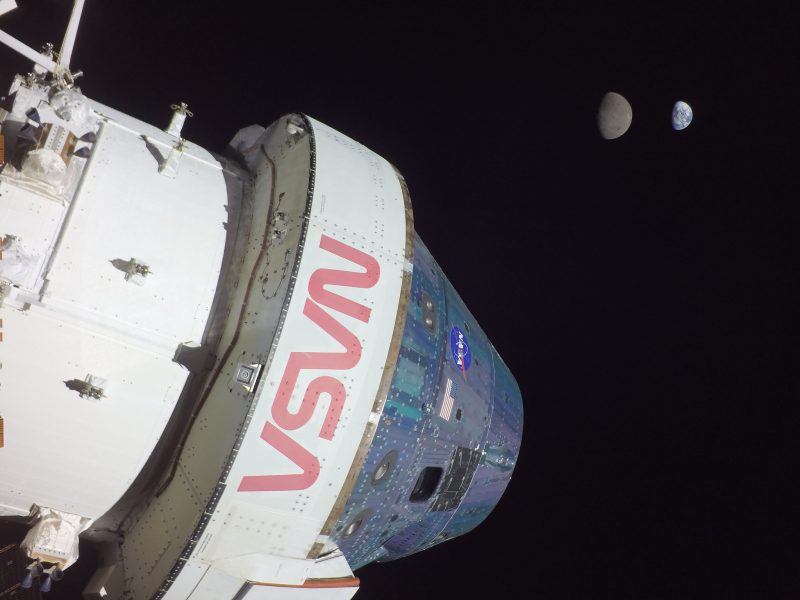 That same day, it viewed this unique perspective of a lunar eclipse.

One of the four SAW cameras on Orion captured this selfie with the Moon just below one of the solar arrays. 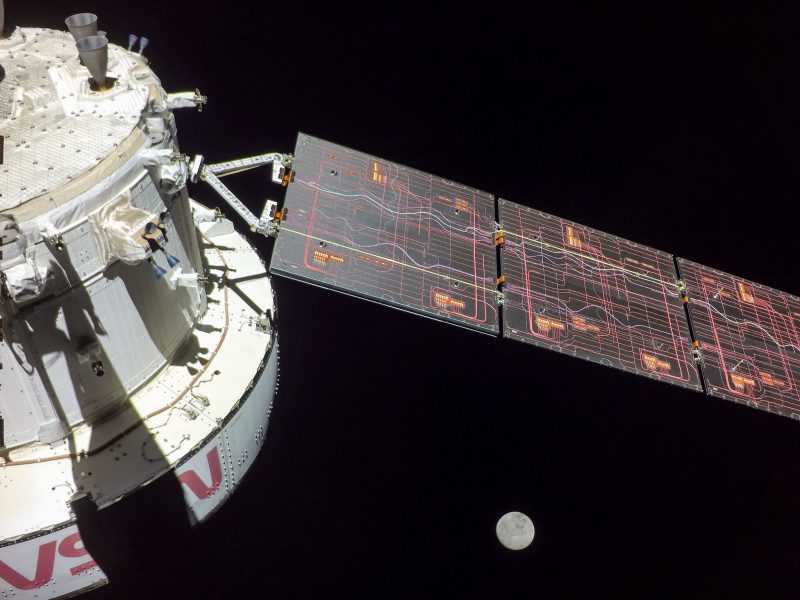 On flight day nineteen, Orion began its second lunar fly-by, capturing this video. Taken by one of the four SAW cameras, it features a spacecraft “selfie” with the Moon in the background.

On Dec. 5 at 10:43am CT, the Orion spacecraft completed a return powered fly-by of the Moon, flying 80.6 miles above the lunar surface. The SAW cameras on Orion captured each of these images and video below, recording the detailed surface of the Moon and spacecraft.

The SAW cameras also captured this closeup of Orion, which provides a unique perspective inside the spacecraft. Visible in the window is Commander Moonikin Campos, a manikin equipped with sensors the measure radiation acceleration and vibration data throughout the mission. 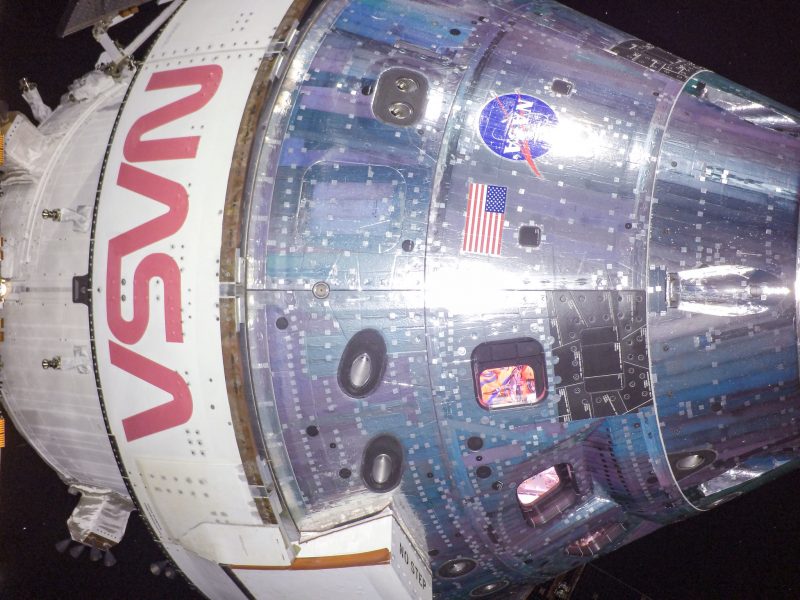 On flight day twenty-two, the Orion spacecraft left sphere of influence of the Moon, saying goodbye to the Moon and continuing its journey back to Earth. The SAW cameras onboard captured this image of the European Service Module and solar arrays, where one of the SAW cameras is visible at the tip of the solar array. 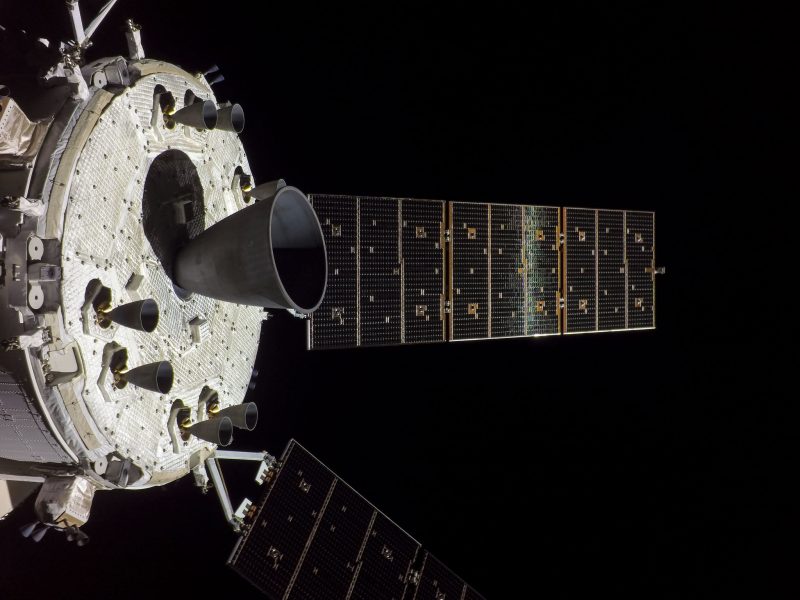 The Artemis I mission splashdown is currently scheduled for 12:40pm EST on Sunday, December 11. Tune into nasa.gov/live to watch it live.

On the last leg of its journey, the Orion spacecraft captured this video of the Earth using one of its four SAW cameras onboard.

At 9:40 PST/12:40 EST on December 11, 2022, the Orion spacecraft successfully splashed down in the Pacific Ocean west of Baja California, ending the Artemis I mission.

We would like to thank and congratulate our partners Lockheed Martin, NASA and ESA on a successful mission and splashdown, as well as the Redwire team! We’re proud to have been a part of this historic mission as the “Eyes of Orion!” 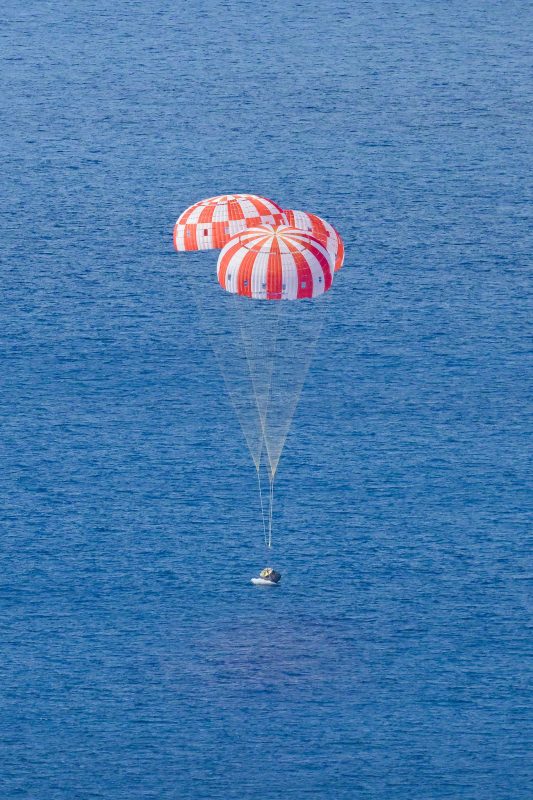 You can also learn more about the Orion Camera System in this pre-launch blog or discover the other ways we’re involved in the Artemis program here.