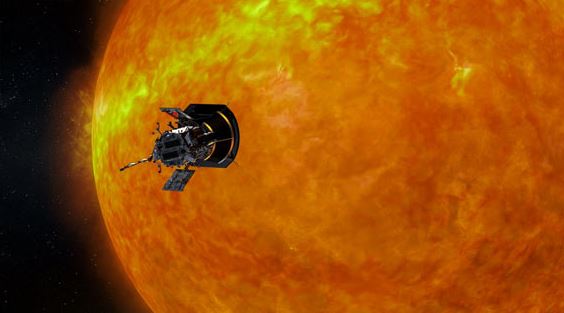 NASA’s historic Parker Solar Probe mission is revolutionizing our understanding of the Sun, where changing conditions can propagate into the solar system, affecting Earth and other worlds. Launched on August 12, 2018, the spacecraft is providing new data on solar activity and making critical contributions to our ability to forecast major space weather events that affect life on Earth. Adcole Space, a Redwire subsidiary specializing in attitude and control system solutions, is proud to have provided a critical navigation component, the Digital Sun Sensor, for the Parker Solar Probe mission.

Attitude determination is the process of computing the orientation of the spacecraft relative to either an inertial reference or some object of interest such as the Earth.

Sun acquisition refers to the process to fix the satellite attitude with reference to the solar position. When the initial attitude of the satellite is stabilized, the normal attitude is kept by a star tracker.

With respect to the Parker Solar Probe mission, thermal shield pointing refers to ensuring that the thermal shield is properly oriented to protect the spacecraft as it flies around the sun.

Fail-safe recovery capabilities are design features that, in the event of a specific type of failure, inherently responds in a way that will cause minimal or no harm to other equipment on the Parker Solar Probe.

The Digital Sun Sensor has a rich flight heritage and is valued for its accuracy, durability, and compact and lightweight design. Other missions and spacecraft the Adcole Digital Sun Sensor have supported include: Mars Pathfinder, Mars Exploration Rovers A and B, Mars Science Lander Curiosity, Mars 2020 Perseverance, IRIS, and Cassini-Huygens, to name a few.

One of the many unique aspects of the Parker Solar Probe mission is that the spacecraft’s instruments and flight control systems are protected by a sophisticated Thermal Protection System (TPS) at the front of the spacecraft. By creating a shield from the sun, the TPS effectively protects the craft as long as proper orientation is maintained. The DSSH and SLSH play a major role in ensuring that the spacecraft is safely aligned during the mission.

The two DSSH are essentially the same as those developed for other programs, except their housings are painted with a white silicone paint for thermal protection. These DSSH are used only when the Parker Solar Probe spacecraft is a “safe” distance from the sun. They are mounted on the sides of the Parker Solar Probe spacecraft body, so their Field of Views (FOVs) point sideways (approx. perpendicular to the orientation of the TPS).  Only when the spacecraft is approx. 0.7 AU from the sun (about the same distance as Venus is from the sun), the spacecraft will rotate by a large amount to bring the sun into the DSSH FOV.  When nearer to the sun, the TPS is oriented towards the sun and the DSSHs are completely shadowed from extreme heat and radiation.

The seven SLSH are mounted at the rear of the spacecraft, roughly around the perimeter of the aft end.  When the spacecraft is oriented properly (that is, the TPS pointed directly at the sun), each SLSH is completely shadowed – that is, in the umbra of the TPS.  The intent is that at any time the spacecraft orientation deviates by more than ≈ 1° from nominal attitude, at least one of the SLSH will become partially illuminated – it will enter the penumbra of the TPS.  The SLSH generates two analog signals that are used to determine how much “umbra violation” occurred, i.e., how much the angular deviation is.  The methodology of processing these two signals from the SLSH to determine the angular deviation is courtesy of a unique, ingenious algorithm developed by John E. Vesel, PhD. The figure above illustrates the step count concept.

The Parker Solar Probe mission’s primary science goals are twofold: to trace the flow of energy in the solar corona and understand its heating and to explore what accelerates the solar wind.

Close to the Sun

The engineering challenges facing this extreme mission are tremendous. That’s because Parker Solar Probe will orbit very close to the sun to collect the data needed to fulfill the mission objectives.

Parker Solar Probe will use seven Venus flybys over nearly seven years to gradually shrink its orbit around the Sun, coming as close as 3.83 million miles (6.16 million kilometers) to the Sun, which is well within Mercury’s orbit. This is about seven times closer to the Sun than any spacecraft has ever flown. Its seventh closest pass by the sun (Perihelion #7) will occur on January 17, 2021, and its fourth flyby of Venus will occur in February 2021.

The mission has been challenged in 2020, and none of the tasks facing the craft are simple. These include the following key dates and objectives:

Parker Solar Probe recently made headlines for one of the spacecraft’s firsts. On September 13–14, 2020, the spacecraft made its first observation of a sungrazing comet—a comet that flies extremely close to the Sun and is usually too small and dim to see from Earth.

On July 5, 2020, Parker Solar Probe caught a glimpse of comet NEOWISE. The spacecraft’s position in space at the time gave it an unmatched view of the comet’s twin tails when it was particularly active just after its closest approach to the Sun, called perihelion.

With plans to keep the mission going until at least 2025, NASA has ambitious goals for Parker Solar Probe. Redwire is proud to aid NASA on its trailblazing exploration of our most important star.

For more information about the Digital Sun Sensor, visit https://adcolespace.com/product/digital-sun-sensor-%c2%b164/