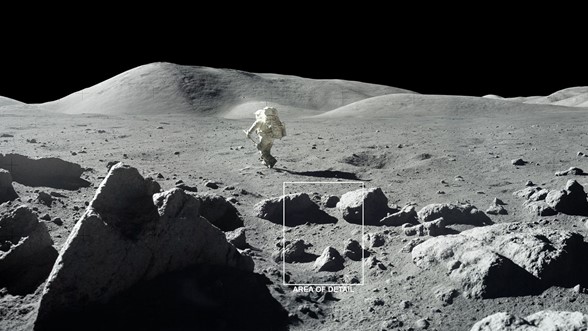 Lunar regolith is unconsolidated fragmented rock debris that covers almost all the Moon’s surface.  Regolith can also be found on Earth, Mars, asteroids and other rocky planets and moons. In its natural state, regolith is not very useful as a building material. However, with processing and advanced manufacturing techniques, regolith can be used to build structures. The ability to 3D print using regolith as a feedstock opens the door to on-demand construction of strong, durable structures on the lunar surface and on other planetary bodies.​

Although 3D printing with simulated regolith has been demonstrated on Earth, it has never been done in space and thus requires further validation in space environments. The Redwire Regolith Print (RRP) mission is a technology demonstration of 3D printing in space using simulated lunar regolith as feedstock material. Enabled by customized hardware that will augment Redwire’s Additive Manufacturing Facility, RRP will be the first in-space demonstration of 3D printing with simulated lunar regolith. RRP will launch to the International Space Station (ISS) on Northrop Grumman’s 16th commercial resupply mission, no earlier than August 10 at 5:56 p.m. EDT.

Developed in partnership with NASA’s Marshall Spaceflight Center, RRP was developed to advance this critical ISRU capability that can be used to support NASA’s Artemis program.  The primary objective of the mission is to successfully demonstrate the efficacy of this manufacturing process in microgravity. The secondary objective is to obtain the tensile, compressive and flexural strength values of the printed material. RRP’s successful demonstration on the ISS will be an important step towards applying RRP technology for NASA’s ISRU technology development roadmap.

The Redwire Regolith Print Mission
The RRP mission hardware leverages Redwire’s Additive Manufacturing Facility (AMF), a commercial 3D printer that has been operating on the ISS since 2016.  AMF will be used for on-orbit operations during the RRP mission.  For this mission, the traditional feedstock used by AMF will be replaced with a proprietary feedstock made of simulated lunar regolith, and polymer that mirrors actual lunar regolith. This mission also requires a custom-designed 3D print head and new print beds.

Similarly, to accommodate ISS operational requirements and reduce overall required crew time, the print heads include several key design features. Primarily, each print head is preloaded with its own supply of feedstock. The result is that the extruders for the RRP mission do not require crew time for loading filament as with the standard AMF extruders.

Three unique slabs will be printed on ISS. Once they return to Earth, NASA laboratories will extract the test specimens from the slabs and test their material properties by performing destructive tests. Visual inspection of the specimens will determine the effectiveness of the manufacturing process and strength testing will provide supporting data on material properties of the printed feedstock.

Supporting the Artemis Program on the Moon and Beyond
RRP is an ISRU capability ultimately meant to be used to manufacture infrastructure and hardware such as landing pads, foundations, roads and habitats on the lunar surface. Raw resources gathered from the lunar surface can also be used to manufacture small and medium-sized objects such as internal finishing and fixtures for habitats. By 3D printing with lunar regolith, furniture, tools and structures can be produced using local materials rather than requiring delivery from Earth. RRP technology can also be used beyond the Moon on other moons or planets with available regolith.

For NASA’s Artemis program, sustainable infrastructure will be needed on the lunar surface to enable humans to explore and study the Moon’s resources over a long period. The Artemis program will also be a key testing ground for ISRU capabilities.  For example, NASA’s Lunar Surface Innovation Initiative will demonstrate technologies to use the Moon’s resources to produce water, fuel, and other supplies as well as capabilities to excavate and construct structures on the Moon. These capabilities will not just be for the lunar surface, but also for future exploration missions farther into space. RRP supports these objectives by 3D printing structures from available on-site resources.

RRP builds on Redwire’s decade of in-space manufacturing experience and development of new space manufacturing capabilities that address ISRU priorities, such as recycling, electronics printing, metal manufacturing and self-repairability. RRP’s goal is to empower humans to more efficiently explore farther into space and without having to depend on supplies from Earth.

To learn more about the RRP mission, click here.