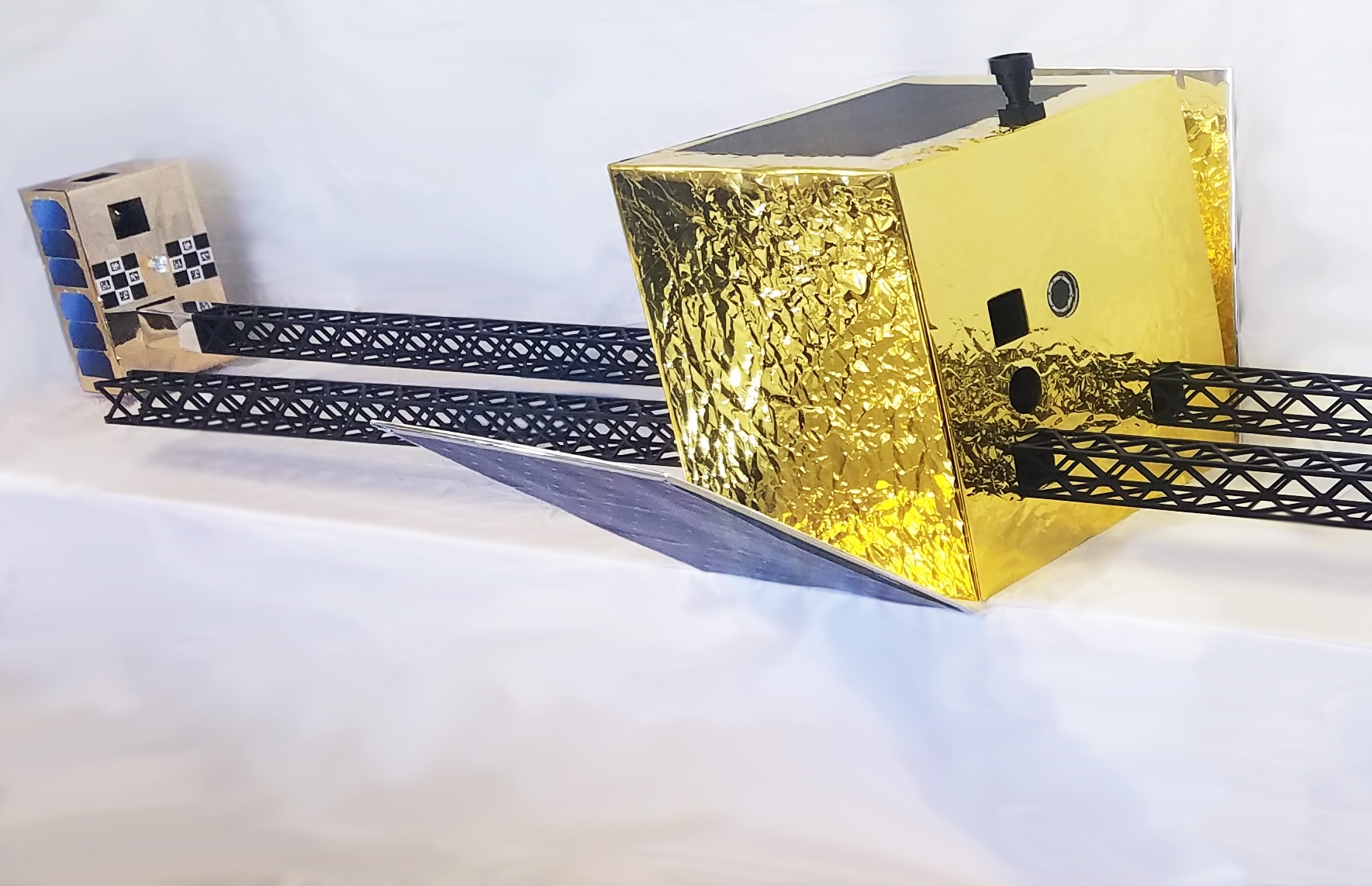 Throughout the history of civilization, humans have gazed into the sky looking to explore our celestial neighborhood. In the modern era, we have developed very powerful telescopes (terrestrial- and space-based) that allow us to identify and study stars, planets, and other astronomical targets. These systems are incredibly complex and expensive to develop and operate. However, new applications developed through Made In Space’s on-orbit manufacturing technology could help widen our lens of the solar system and advance space exploration.

Once the satellite is delivered to its intended orbit, Optimast-SCI would manufacture and deploy two 10-meter beams with a mirror unit on each end with modular internal optics developed with Lowell Observatory, a world leader in astronomical optical interferometry. The mirror units are designed to collect light and reflect it to a central optical system housed within the satellite body.

Optimast is a self-contained, scalable machine for producing microgravity-optimized linear structures on-orbit, developed as a product application of the Archinaut technologies.

Interferometry is the scientific practice of merging two sources of electromagnetic waves (e.g. light or radio waves) from a single object and collecting data on that object from analyzing the patterns those merged waves create. This allows astronomers to combine signals from multiple telescopes, called collectors, and act as if they are using one big telescope – a virtual telescope as large in diameter as the distance between the actual instruments. The more distance between the collectors translates to higher resolution in the imaging.

Ground-based interferometers must be extremely large because atmospheric conditions affect how much light can be collected. Additionally, the rotation of the Earth limits how long these observatories can look at any one part of the sky. Complicated – and expensive – mechanisms are required to make sure the light from each collector arrives at the central collection point, called the focal plane, all at the same time.

The Navy Precision Optical Interferometer (NPOI) is a collaborative effort between the U.S. Naval Observatory, the Naval Research Lab, and Lowell Observatory.

NPOI is an American astronomical interferometer with the world’s largest baselines. It is a highly specialized telescope capable of extremely high-precision measurements. The interferometer spans 430 meters, over 4 football fields in length.

Instead of employing a single primary mirror, NPOI uses an array of up to six mirrors spaced tens to hundreds of meters apart to precisely direct up to six beams of light from a star to a point. Extraordinary image detail can be derived from the resulting data. NPOI is one of the few major instruments globally which can conduct optical interferometry.

The W.M. Keck observatory is a two-telescope astronomical observatory at an elevation of 4,145 meters (13,600 ft) near the summit of Mauna Kea in Hawaii. The Interferometer allowed the light from both Keck telescopes to be combined into an 85-metre (279 ft) baseline, near infrared, optical interferometer. Both telescopes feature 10 m (33 ft) primary mirrors, currently among the largest astronomical telescopes in use. Keck Observatory’s large telescopes have the ability to operate smaller mirror segments as a single, contiguous mirror. Each of the primary mirrors are composed of 36 hexagonal segments that work together as a single unit. Each segment is 1.8 meters wide, 7.5 centimeters thick, and weighs half a ton.

If we send an interferometer to space, we eliminate the dimming effects of the atmosphere and can point the observatory at objects of interest for as much as 10,000 times longer than a terrestrial observatory. However, the distance between the light collectors must still be relatively large to study faint objects like Main Belt asteroids and the dusky discs around young stars still forming planets.

These space-based interferometers are still too big to fit in a rocket in one piece. Traditional deployable structures are either too floppy to hold the collectors at the precise locations needed or are so heavy that they are too expensive. Flying the telescopes in formation (without touching each other) would require each collector to have its own propulsion and precision flight control systems to point the light at the central satellite with the focal plane. This approach only works so long as each collector has enough fuel and precision pointing to stay in formation.  That being said, the advantages of operating an expansive interferometry satellite are vast, such as:

Manufacturing the interferometry support structure in space – from a single, small satellite – allows us to dramatically reduce the mass of the total system and make sure that each collector is pointed right where it needs to be without having to use fuel or expensive directional control systems.

The Made In Space Optimast technology robotically manufactures long structures that only use as much material as is needed to hold their shape in space, rather than surviving Earth’s gravity and the intense vibrations during launch. A space-based interferometer using Optimast is small enough to fit on a single rocket launch, affordable enough for low-cost science mission opportunities, and effective enough to provide the precise distances between collector telescopes that these science missions require.

Precision in-space manufacturing, using Optimast-SCI, enables the construction of large baseline structurally-connected interferometers in space with lower mass, greater structural precision, and less mechanical complexity than existing mission concepts. This use of autonomous manufacturing and assembly enables much larger, effective apertures as compared to conventional deployables. It offers unique value propositions in their respective markets by targeting specific capabilities not currently possible with current smallsat architectures. Many of the capabilities enabled by Optimast-SCI include:

This use of autonomous manufacturing and assembly enables much larger, effective apertures as compared to conventional deployables. The competitive advantage of the Optimast-SCI provides system is an affordable approach to space-based optical interferometry that fits within existing mission classes and small satellite mission budgets. Traditional deployable structures are ultimately limited by both the volumetric packing factors for launch and the parasitic mass added by deployment and traverse mechanisms. There are also no known commercially-available composite rollout booms for small satellites that meet the optical baseline length, stability, and stiffness requirements.