New Space-Based Manufacturing Technologies Demonstrated by Made In Space 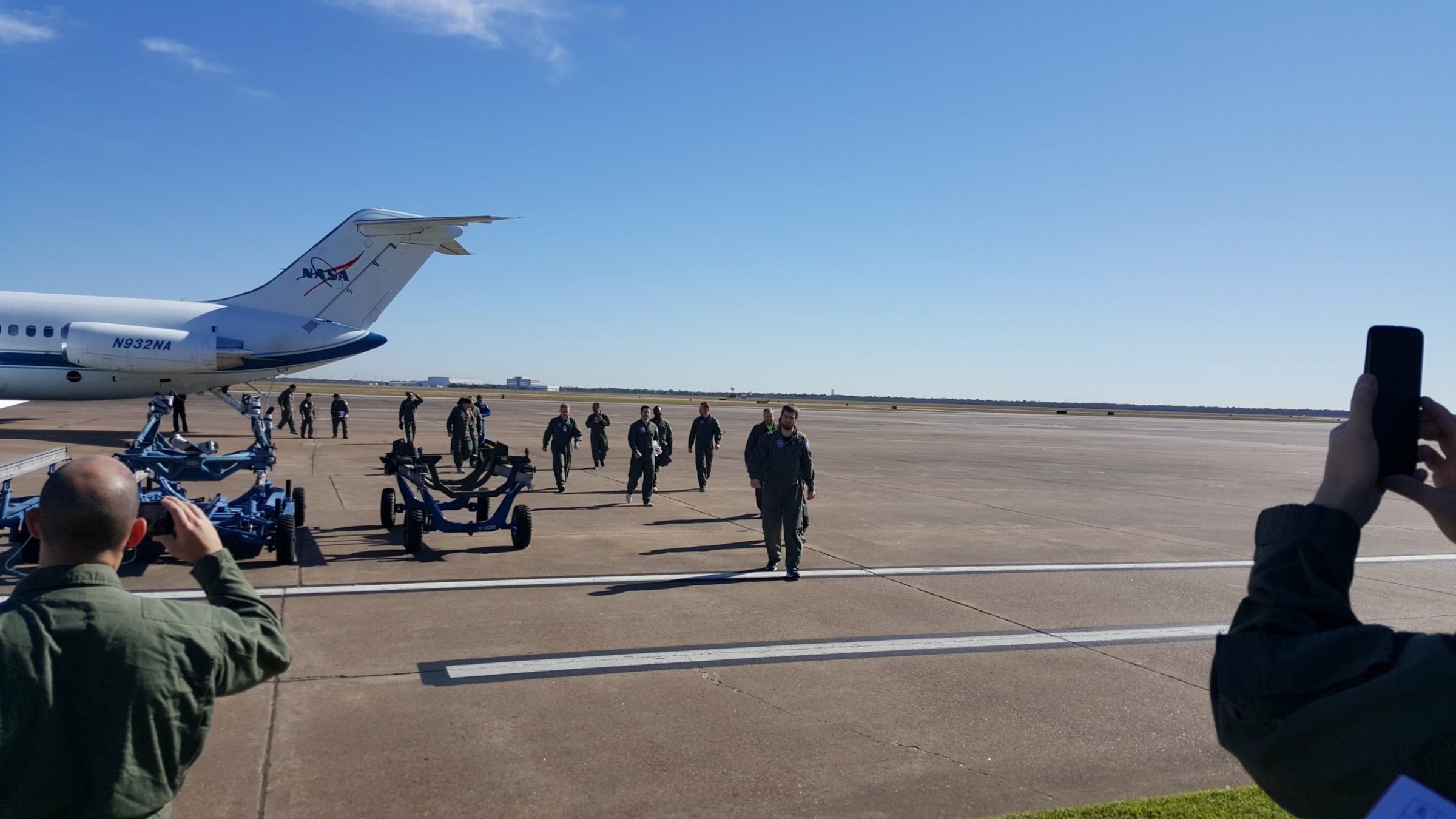 The Made In Space team coming off of the FOP aircraft used for microgravity testing in Houston, TX

Last year, a Made In Space-led team achieved something that had never been accomplished. For the first time in history, a commercial in-space manufacturing facility began operation aboard the International Space Station (ISS). While private parties are able to commission objects to be built by Made In Space’s Additive Manufacturing Facility (AMF) on orbit, the hardy device also supports astronauts by manufacturing parts, tools, and supplies that can be used on the ISS.

Made In Space has continued its mission to enable humans to live and work in space by demonstrating several new technologies in microgravity. Testing machines on Earth that are optimized to work in environments which have little or no gravity can be difficult at the bottom of Earth’s gravity well. The Flight Opportunities Program (FOP) at Johnson Space Center in Houston, Texas utilizes high-tech aircraft to fly in aggressive parabolic arcsa nose dive followed by a sharp ascent. This maneuver creates a gravity-free environment within the plane’s cabin for less than a minute before having to pull up and repeat. After partaking in over 200 of these parabolic flights, MIS has demonstrated several manufacturing techniques in microgravity that will be critical to the success of our journeys to other planets. On these flights, which yielded nearly an hour of time in microgravity, Made In Space successfully printed electronics, casted metal, 3D printed using stereolithography, bioprinted, and processed manufacturing by products.

The interior of the parabolic flight aircraft. Note the padded walls, floor, and ceiling.

During its parabolic flight mission, Made In Space tested a prototype Satellite Manufacturing Machine (SMM). The SMM is a multi-material 3D printer and robotic assembly system. It creates useful electronic devices by additively manufacturing structure and circuit board substrates, robotically placing electronic components (in this case a solar cell, integrated circuits, and a transmitter), and laying down electrically conductive traces. For this demo, SMM was programmed to produce a picosatellite replicating the functionality of the world’s first satellite, Sputnik. Unlike Sputnik, this robotically manufactured satellite transmitted “Go Bucks” in honor of Chief Engineer Michael Snyder’s alma mater, the Ohio State University. SMM leverages existing government and Made In Space investments in the development of space-capable manufacturing. SMM was built using flight back up hardware from the first successful mission to manufacture in space, the 3D Printing In Zero-G Technology Demonstration mission.

The addition of electronics printing to the on orbit manufacturing technology that is currently available enables entirely new ways for humans to explore space.For crewed missions, this technology enables multi-material manufacture of electronic tools and products. This means in-space repair or replacement of not just handtools, mounts and the like, but also sensors, PCB boards, and other circuits. In the digital age, this increased level of adaptability is essential for deep space missions and colonizing LEO and beyond.

Married to other Made In Space tech, like Archinaut, the implications for deep space exploration are huge: space stations, interplanetary spacecraft, advanced satellites, resource depots — all rapidly constructed and deployed throughout the solar system without launch constraints to support and enable the missions of our ambitious species. The necessity for a fully integrated manufacturing system in space with this capability is undeniable. Without support from sophisticated manufacturing technology, like SMM, our dreams for space exploration would be difficult to acheive.

Example metal-casted wrench manufactured by Made In Space

In addition to electronics printing, Made In Space demonstrated gravity-independent metal casting during its participation in the FOP. Using a proprietary method called Forced Metal Deposition (FMD), molten metal is cast into a 3D printed mold to form metal objects. Though this may sound similar to traditional, Earth-bound metal casting, performing it in microgravity is quite different. The arrival of this cornerstone terrestrial manufacturing technology to space allows parts to be produced in space in a well-known fashion, accelerating the adoption of this technology. It also unlocks the potential for making entirely new kinds of metal alloys and structural designs that are not possible on Earth. The ability to manufacture polymers, electronics, and metals on orbit is the next step in Made In Space’s vision to build huge space structures that will support humanity’s interplanetary future.

Made In Space also successfully tested an Earth-independent stereolithographic (SLA) 3D printer. SLA printers form solid, three-dimensional objects by curing a liquid photopolymer resin with a light source such as a UV projector or laser. SLA printers provide superior feature resolution and increase the classes of materials one can 3D print with.

Of particular note is the ability to 3D print castable materials, enabling lost wax casting of high strength metal parts when paired with metal casting technologies such as FMD. SLA printing also enables manufacturing ceramic parts critical for many space applications, such as reentry shielding. SLA printing also enables manufacture of optically transparent parts, opening the door for manufacturing lenses and other optical elements with appropriate post processing. This demonstration presented a unique challenge: controlling a liquid in microgravity. In order to successfully print, SLA printers require a thin layer of liquid photopolymer resin at the print surface. During microgravity printing, this liquid layer had to be maintained at the printing surface without floating away or contaminating other parts of the system.

Made In Space developed and demonstrated a complete system for controlling the liquid layer. This demonstration was successful, producing accurate, high-quality parts in microgravity. This technology will add to Made In Space’s current extraterrestrial additive manufacturing capabilities and will ultimately broaden our ability to respond to the unforeseeable demands of on orbit manufacturing. Made In Space takes pride in partnering with top flight technology companies to further space development. In order to demonstrate this SLA printing technology, Made In Space was honored to work with B9Creations. B9Creations produces SLA 3D printers for consumers and professionals and was founded by Michael Joyce, a serial entrepreneur and Google Lunar X-Prize team founder.

This parabolic flight mission also presented Made In Space with the opportunity to demonstrate its microgravity material processor. Like terrestrial material processors, the microgravity material processor is capable of grinding input material into smaller pieces for further use or compact storage. Crucially, material is forced through the system by forced convection and contact from a driven plate, substituting the driving force gravity provides on the ground. During weightless portions of the mission, waste plastic was ground to a size appropriate for extrusion into 3D printer filament, buying down risk for space based material recyclers, a technology which is still under development via Made In Space’s R3DO program and other government activities.

Coupled with Made In Space’s 2013 demonstration of weightless extrusion of 3D printer filament, Made In Space has demonstrated nearly every major system of a space-based material recycler. Looking toward the future, this is a foundational technology for in-space foundries which will one day process ore mined from asteroids into spacecraft fuel and oxidizers or rare Earth metals. This microgravity material processor technology also has the ability to precisely direct the flow of small particles and chunks of material. This ability is needed to direct and capture FOD from subtractive manufacturing technologies in microgravity, such as CNC heads. In this demonstration, all test shavings were successfully directed and captured, exactly was is needed for CNC machining and other subtractive manufacturing in space, enabling safe creation of high-precision metal parts in space.

To support off-Earth medical research efforts, Made In Space also demonstrated bioprinting in microgravity. An experiment successfully distributed and attached living cells to multiple target locations using a 3D printer. A bio-scaffold was 3D printed and cells were then placed into the scaffold.The results from this FOP tech demo will contribute to future technological developments for both the on orbit and terrestrial bioprinting of tissues and organs.