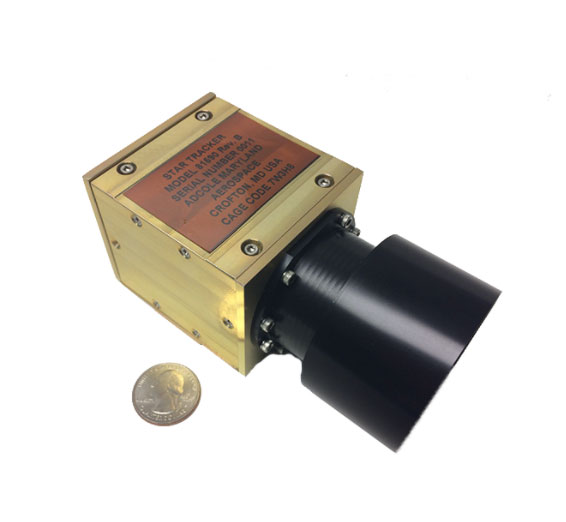 NASA tackles some of the biggest questions in the universe, and the tools needed to look for answers are often, themselves, big, in both size and cost. But one small aerospace company has designed a modern take on an ancient navigation device that is tiny, cheap, and potentially revolutionary for NASA and private companies that explore the universe.

For millennia, travelers relied on the stars to pinpoint their location on the globe. Once humans took to space, they adapted Earth-proven technologies for the new environment. Starting with the earliest missions, many spacecraft have used specially designed sextants to measure the angle between different celestial bodies in relation to each other or the horizon.

These star trackers are important not just for navigation but because “the better we can point our satellites, the better images and science data we can get,” explains Alice Liu, attitude control system engineer at Goddard Space Flight Center. “We need to be able to point at a direction where we want to take a picture and have to be stable while we take it.”

NASA’s flagship missions often require the most cutting-edge technology available, which often hasn’t been around long enough to be miniaturized, explains Jason Mitchell, assistant chief for technology in Goddard’s Mission Engineering and Systems Analysis division. But that is starting to change. Satellites are getting smaller and less expensive, and it is becoming possible to get scientific results in a new way—if the instruments aboard are powerful enough.

That’s where a new star tracker, designed by Adcole Maryland Aerospace, might come in.

The device is small enough to fit inside a CubeSat—each side is only two inches long—and yet is capable of pointing a spacecraft to high-level accuracy, down to about 0.1 degrees of error, matching the performance of much larger instruments.

“We’re talking about crossing a boundary into bringing that capability into a new class of mission,” says Mitchell. Where before, NASA might have spent tens or even hundreds of millions of dollars for a sun-observing satellite to get the kind of resolution it needs, with less-expensive CubeSats, it is far more feasible for researchers to, for example, deploy two units to observe from different angles.

“Think about your eyes, stereo vision. Now you can have stereo pictures of the sun,” he says.

More broadly, “the number of measurements can go up. With the cost savings, multiple spacecraft can do the same thing but in different locations. And, if something fails, the mission isn’t lost completely,” Mitchell adds.

“It really does revolutionize the way that you can think about generating measurements. It enables many new possibilities for science.”

Small satellites, often called CubeSats, are far less expensive to build and launch than traditional satellites,
but to use them for important scientific research, engineers have had to develop new tools that are
small and inexpensive but still precise and powerful enough to get good results.

In 2012, explains Liu, who specializes in fine pointing and tight stability for space missions, “CubeSat work had started to gain interest, and Goddard was getting ready to be part of the CubeSat world. I was reviewing proposals that would give us better pointing stability.”

She came across the company’s proposal and “was very impressed,” she recalls.

Previous pointing devices often used magnetometers and horizon sensors to orient a CubeSat in relation to the Earth’s magnetosphere or horizon. But accuracy was only good to about one degree at best, says company president Glen Cameron.

Instead, Adcole Maryland Aerospace proposed star trackers that use a camera to take an image of the starscape. Then, software analyzes the image to calculate orientation. “If you have two bright stars in the night sky, the angular separation between those two stars is unique. There’s no pair of bright stars with exactly the same separation,” explains Steve Fujikawa, the company’s principal investigator on the project. The star tracker uses the angle of separation to identify which stars the camera is pointing at; using that information, the CubeSat can orient itself in space.

This is essentially the same process sailors have long used with sextants, but of course on a CubeSat, there is no person to do the calculation. So, as part of the work done under the SBIR contracts, Fujikawa mined publicly available star catalogs to create a database of “star separations”—some 70,000 of them, based on around 1,825 stars.

That sounds like a lot, but it’s actually a carefully curated selection, designed to cover the entire sky while minimizing the processing load, so calculations can be done quickly and with minimal demands on memory and power.

The company also developed a miniature optical system that is small enough to fit easily in a CubeSat and is radiation-hardened to be able to perform in the space environment.

The original contract enabled them to develop a single-camera star tracker and its related software, and a subsequent SBIR contract enabled the development of a two-camera system that provides greater flexibility, says Cameron. If one camera is pointing toward the sun, which is bright enough to block the view of other stars, the second will be pointing elsewhere, meaning the star tracker is always able to find its orientation.

The company now sells these components in three different configurations, Cameron says. Customers can buy a stand-alone star tracker, a single-camera package that includes the star tracker and the attitude control system, or a double-camera package. By the end of 2017, they had already sold around 20 units across all three models, he adds, which is a big success for the first year.

Part of the success, Fujikawa says, could be linked to the relatively affordable price—ranging from around $32,000 for the stand-alone star tracker to around $100,000 for the dual-camera package—something the company links directly to its SBIR funding. “We have a tremendous advantage, because NASA funded the development, so we don’t have to amortize the development cost over any production,” he emphasizes.

Mitchell and Liu say this notches a big success for the SBIR program as well: Adcole Maryland Aerospace’s team “not only achieved the performance they promised, but they have also expanded it to commercializing the components. It’s going to be a sustainable technology going forward.”

And, adds Mitchell, by creating “a brand-new capability, it encourages other people to look into it. We end up with not only healthy small businesses, but it also generates competition that helps us, because now there’s a healthy market and we have more choices.”

The primary application for now is Earth-observation missions, such as monitoring deforestation: “Say an image was done six months ago of a certain spot in the Amazon, and you want to get the exact same image so you can get a comparison,” Cameron explains. Or perhaps a company wants to monitor methane emissions from an oil refinery: “You need to point your instrument exactly at that place to get that imagery,” he says.

Another customer, however, is using the star tracker for a project to detect planets around distant stars, Fujikawa says. “To do that, you have to point the spacecraft really precisely at the other star. This kind of mission is only enabled by a sensor like this.”

Looking forward, he adds, for interplanetary missions and CubeSats orbiting planets other than Earth, there will be no possibility of using the Earth’s horizon or magnetic field for orientation, so star trackers like these will be crucial.

This tiny device fits inside a CubeSat and contains all the hardware and software to precisely point
the miniature satellite— within 0.1 degrees of error. Developed by Adcole Maryland Aerospace with
funding from several SBIR contracts, it is at least an order of magnitude more precise than
previous pointing devices for CubeSats.