The Story of the World’s First Zero Gravity Printer 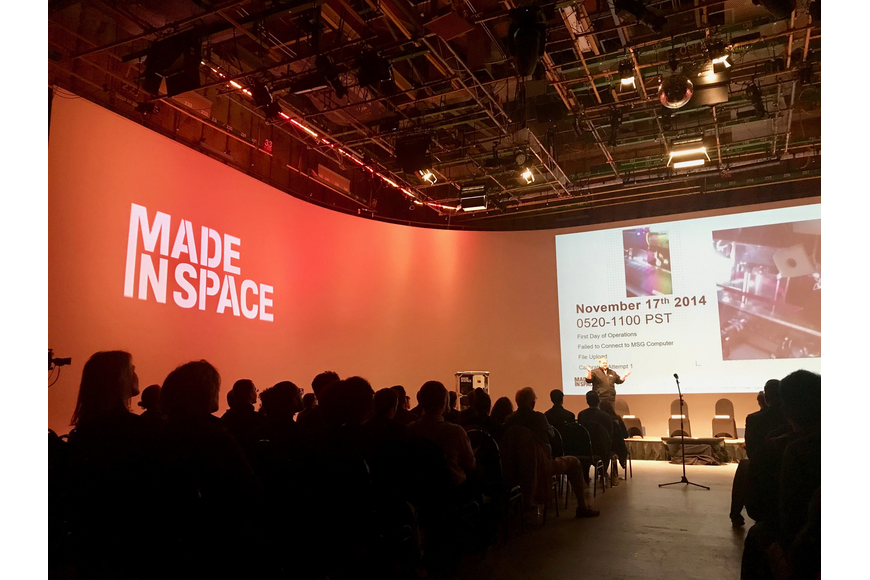 In 2014, Made In Space, Inc. (MIS), with NASA, changed the world by manufacturing the first object in space with the 3D Printing in Zero-G Experiment (3DP). This first print signaled new possibilities for manufacturing objects in space.  It changed what was considered possible and was a gateway for further innovation that will enable humans to sustainably live and work in space beyond low Earth orbit.

The story of 3DP is a story of firsts. MIS was first to print a part in space; the first to uplink a part for printing to space; and the first to have a permanent commercial 3D printer facility, the Additive Manufacturing Facility (AMF), aboard the International Space Station (ISS).

The success of 3DP highlights the “failure-is-not-an-option” philosophy and unfaltering work ethic that drives MIS innovation today. Current MIS projects and game changing technology, like Archinaut and advances in space-enabled manufacturing capabilities, all started with 3DP. This story also proves that you can achieve so much with humble means as long as you have the passion and drive to work tirelessly to meet your goals.

The road to the first 3D printed part in space began, quite literally, on the road.  Mike Snyder, the Principal Investigator of the 3D printing project and MIS’s Director of Research and Development at the time, packed up his sedan after finishing his master’s degree in Ohio and drove to California to devote himself to enabling human’s space exploration and travel.

MIS started with humble beginnings and the goal of being the first to 3D print usable parts in space. It was a small company with limited facilities. The company’s first office was under the supersonic wind tunnel at Ames Research Center in Mountain View, California.

At NASA Ames, a very small team worked to develop the AMF that would later be flown on the ISS. The core team of four people worked within one small room for 14 to 16 hours per day. The work being done there was the foundation that future development phases of this technology would be based upon.

Failure is Not an Option

Despite having  limited resources, failure was not an option for the team on their journey to 3D printing in space. The team focused on success through preparation and technical excellence. Because of this attitude, they attacked each step of development with precision and passion.

This was also a learning process; the team was constantly adapting based on near failures and successes in order to accomplish a feat that had never been done before. One of the near failures was a supplier delivering inferior materials at a pivotal time in the project. This near failure has informed a risk that they accept and try to mitigate on every project since.

And it didn’t stop there. When they packed up the first unit to go to space, they made sure the payload arrived at its destination securely and safely. As a team, they loaded up an RV and drove the unit from California to Alabama. Driving the unit to Alabama ensured it would be undamaged, removing a risk from the equation. Mitigating these types of risks played a big role in the company’s future successes in space.

The First Part Ever Printed

The first part ever printed was a part needed for the 3D printer itself.  It was an electronics protector piece that protected the extruder on the unit. The printing of this part was an exciting and momentous occasion. MIS and the flight crew aboard the ISS were both excited to see this become a reality.

However, the print was not without drama. The printer was not responding. MIS used the ground unit to troubleshoot the issue. It turned out that a necessary driver was removed from the system. After putting the driver back where it belonged, they were off to make history, marking a major accomplishment for MIS and a milestone in space history.

The team also took advantage of the opportunities they had to the fullest. They had a window to print parts on the ISS and, during that time, they used every moment available to test printing as much as possible. When they had met the objectives of the ISS experiment, they continued to print to gather additional data about the printing process in space to inform design choices for their future projects.The team was always thinking of the future and never resting on the status quo. Taking advantage of these opportunities has enabled them to develop new technology, with knowledge and deliberate intention ensuring success.

The success of printing in space enabled MIS to provide immediate value to the crew living in space aboard the ISS. One of the crew members had lost his wrench. When MIS found out he needed this tool, they immediately worked to change the last part that was going to be printed during the mission. They designed the print and then worked with NASA to ensure safety and follow necessary protocols. This wrench was the first 3D printed part uplinked from Earth to space. It filled an immediate need for a crew member and demonstrated the importance in-space manufacturing would have in future endeavors.

MIS also utilized the 3D Print ground unit to do print tests at sea. They went aboard the USS America to test printing off of solid land to see how the printer would perform. While aboard, they printed some pieces for the ship that were needed. They were able to provide immediate value while looking forward in the advancement of what MIS’s 3D printing technologies can accomplish in the future.

The success of 3DP was the start of MIS’s impressive technological journey and was the foundation for the revolutionary technology MIS continues to develop today. Progress in space-enabled manufacturing and the creation of space-enabled materials like Zblan optical fiber, and developments in exploration manufacturing which will enable humans to travel and live in space farther and longer than ever before, are all possible because of 3DP’s success.

From the beginning, the MIS team has consistently looked for ways to make life changing, immediate impacts not only for life in space, but for life here on Earth. The first 10 years of Made In Space have been filled with successes and major achievements. They have been built on the principles of hard work and dedication, but also a foundation of ever evolving maintaining a fast development pace with a “no failure” attitude. It’s these values that will carry the company into the next 10 years of innovation.

The clips featured above are of Michael Snyder, Chief Technology Officer of Redwire, speaking at the 5th Anniversary of 3DP – “Building the Future in Space: A Conversation About the World’s First Zero Gravity Printer.” Check out the full presentation at https://youtu.be/2Pw9zlw_FHE