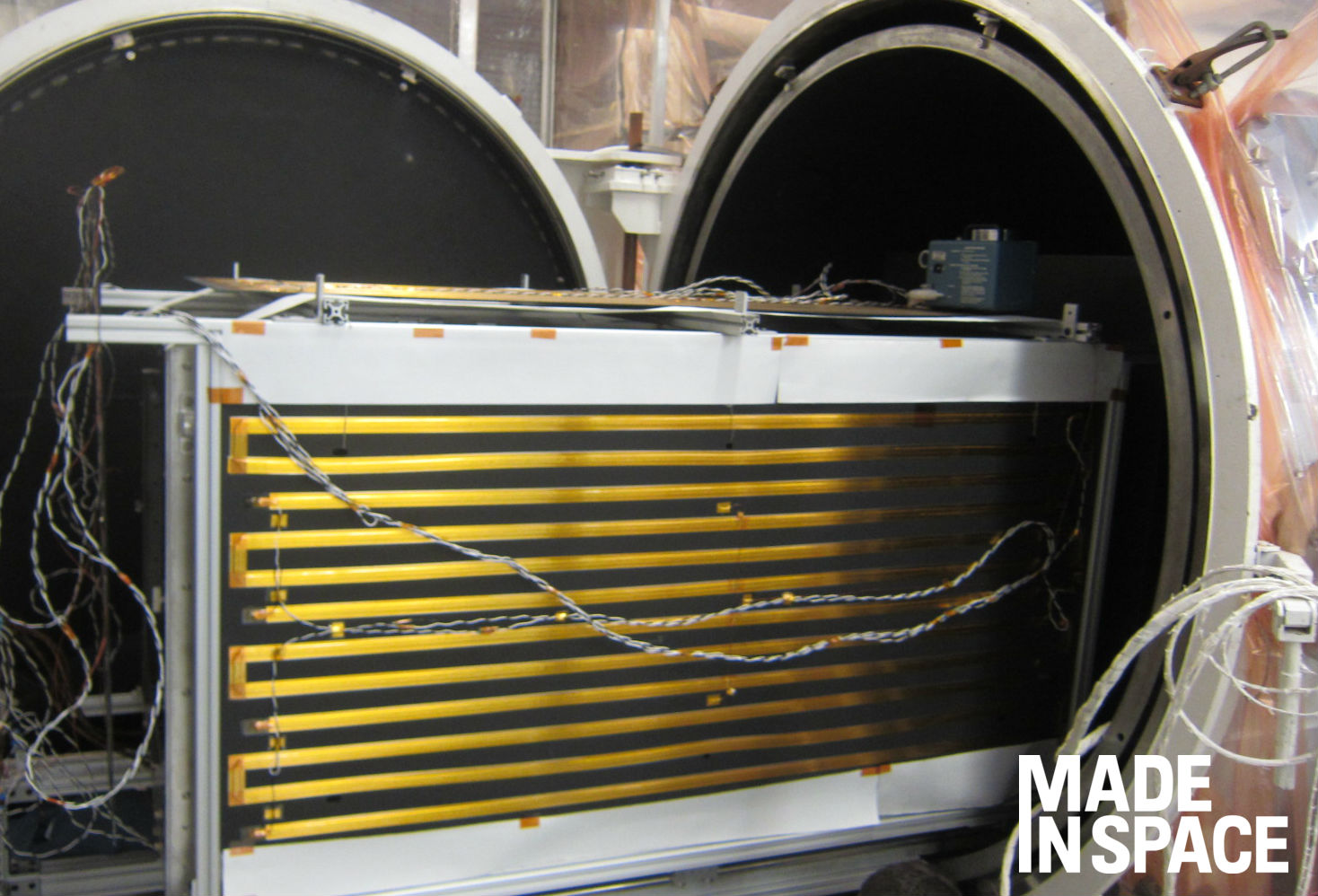 MOFFETT FIELD, CA, March 12, 2019  — As part of a NASA Tipping Point contract, Made In Space, Inc. (MIS) has reached a significant milestone for their Archinaut program by successfully demonstrating its additive manufacturing and robotic assembly capabilities in a space-like environment.

During TVAC testing, MIS successfully demonstrated manufacturing and robotic assembly of a variety of structures. While inside the vacuum, operations were monitored and inspected by an internally developed camera system to validate proper printing and assembly operations. MIS demonstrated autonomous reversible connection and joining techniques of 3D printed parts and other pre-fabricated components such as nodes and trusses via a robotic arm system and end effector designed for in-space assembly operations. Furthermore, the robotics system is also capable of carrying out repair operations and can be integrated into small sats for payload retrievals and installations.

With the completion of this ground-based testing, core Archinaut technologies are now prepared to operate in space. This milestone represents the defining capabilities of the Archinaut platform and raises its technology readiness level.

“We are very proud of our team for achieving this critical proof point that ultimately lines us up for operational missions with customers in both government and commercial sectors,” said Andrew Rush, President & CEO of Made In Space. “We look forward to the next steps of preparing Archinaut-enabled missions for flight.”

One example application of Archinaut is the PowerKit system, which can deploy a 2 kW power system on a 150 kg ESPA-class satellite, nearly 5x the average state-of-the-art power system. This is made possible by utilizing the onboard Extended Structure Additive Manufacturing Machine (ESAMM), where expansive solar array systems are deployed from the satellite bus. These solar arrays, paired with Archinaut’s power system, will provide large satellite power to an ESPA class satellite. Other deployment opportunities include large scale antenna used for remote sensing, telecommunications, and scientific exploration.

“This technology will contribute to a more sophisticated low earth economy and lay the groundwork for more advanced commercial utilization of space,” added Rush.

The MIS-led team includes Northrop Grumman, which provides systems integration and Oceaneering Space Systems, who develop the hardware robotic arm. MIS sees the union of 3D printing and robotic assembly as paramount to optimizing large structures for the space environment that are otherwise too large to be launched in a rocket fairing from Earth. Archinaut’s multi-purpose technology will also enable repair, upgrade, and sustainment missions which will ultimately play a key role in space commercialization.

Made In Space, Inc. is the world’s most experienced in-space manufacturing company. Established in 2010 and with offices in Florida, California, Alabama and Ohio, Made In Space leverages the unique properties of the space environment to develop manufacturing solutions to commercial, industrial, research and defense challenges. Archinaut, one of Made In Space’ flagship programs, enables in-space production and assembly of the backbone structures for large telescopes, repair, augmentation, or repurposing of existing spacecraft, and unmanned assembly of new space stations. The company’s vision is to enable the future of space exploration by offering off-Earth manufacturing capabilities. For more information about Made In Space, visit www.madeinspace.us.