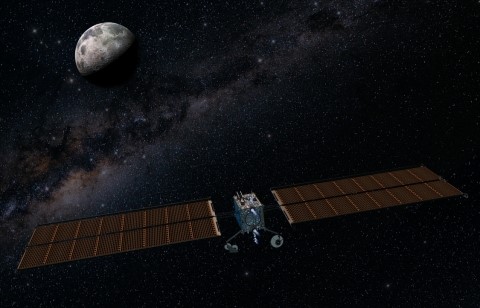 Redwire awarded contract by Maxar Technologies to provide ROSA Solar Arrays for the Power and Propulsion Element of the NASA-led Gateway. 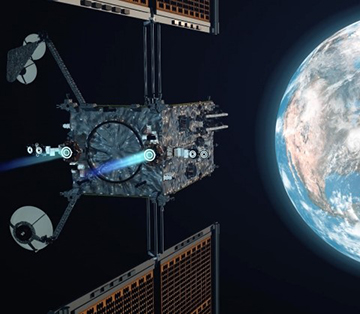 The Power and Propulsion Element is a key component of NASA’s overall Artemis plans to land the first woman and next man on the surface of the Moon by 2024, enabling future missions to Mars. The Power and Propulsion Element, which will be the first segment of the Gateway, will provide power, maneuvering, attitude control, communications systems, and initial docking capabilities for the Gateway. Maxar’s Power and Propulsion Element design is based on its powerful 1300-class spacecraft platform, which provides flexibility for a broad range of applications and technological advances. High-power solar electric propulsion (SEP) will be used to efficiently maneuver the spacecraft into its orbit and subsequently move the Gateway between lunar orbits over its lifetime to maximize NASA’s lunar science and exploration missions.

ROSA is a groundbreaking, ultra-lightweight, compact, modular and scalable solar array system that was successfully demonstrated on the International Space Station in June 2017. Various modular versions of the ROSA solar array are also being produced for NASA’s DART Mission, and for many other proprietary and commercial applications. ROSA is available for use on all of Maxar’s spacecraft platforms. 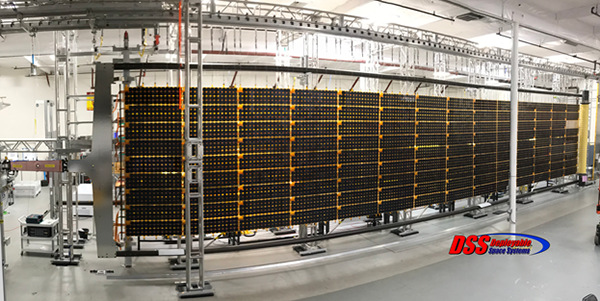 “DSS is proud to support Maxar Technologies and NASA with the enabling ROSA solar array system for this extraordinary human exploration Power and Propulsion Element mission that will return our nation to the Moon, and accelerate exploration to Mars and beyond,” said Brian Spence, President of DSS. “DSS is excited to participate in NASA’s Artemis program and provide our game-changing ROSA technology, leveraged substantially from our current ROSA 50kW+ size solar array long-term recurring production program, for the Power and Propulsion Element. For more than a decade, DSS has been at the forefront of advanced solar array system technology development, design, manufacture, and validation testing for the most demanding mission applications. ROSA is the highly successful offspring of DSS’s rigorous technology development and commercial infusion initiatives. For this important Power and Propulsion Element spacecraft, and our Maxar and NASA customers, DSS is further committed to maintaining ROSA as the highest quality, most affordable, and highest performance solar array solution available.”

“Maxar is excited to add Deployable Space Systems to its list of world-class suppliers on the Power and Propulsion Element for Gateway,” said Maxar’s Mike Gold, Vice President of Civil Space. “ROSA is an essential component of our Power and Propulsion Element solution and an enabler for future commercial and exploration missions, particularly a human mission to Mars.”

Deployable Space Systems, Inc. (DSS) is a leading provider of satellite deployable structure and solar array power solutions to the global space markets, encompassing a wide array of applications including civil space exploration, science and earth observation, defense intelligence and communication, and commercial telecommunications industries. The business was founded in 2008, is solely owned and operated, and is headquartered in Santa Barbara, California, USA. For more information about DSS, visit www.dss-space.com

Maxar is a trusted partner and innovator in Earth Intelligence and Space Infrastructure. We deliver disruptive value to government and commercial customers to help them monitor, understand and navigate our changing planet; deliver global broadband communications; and explore and advance the use of space. Our unique approach combines decades of deep mission understanding and a proven commercial and defense foundation to deploy solutions and deliver insights with unrivaled speed, scale and cost effectiveness. Maxar’s 5,900 team members in 30 global locations are inspired to harness the potential of space to help our customers create a better world. Maxar trades on the New York Stock Exchange and Toronto Stock Exchange as MAXR. For more information, visit www.maxar.com

The multiple patented and award winning (2016 R&D-100 Award for Most Market Disruptive Technology) ROSA solar array technology is a new and innovative mission-enabling rolled flexible blanket solar array system that offers greatly improved performance over conventional rigid panel solar arrays and other state-of-the-art solar arrays, as well as greater affordability for use on future NASA, Air Force, and commercial space missions. The DSS ROSA solar array features an innovative “roll out” design which uses composite booms to serve as both the primary structural elements and the deployment actuator, and a modular photovoltaic blanket assembly that can be configured into a multitude of solar array architectures. The stored strain energy of the booms enforces the unrolling deployment actuation, and when fully deployed the rigid booms provide the solar arrays’ structural stiffness and strength. The ROSA technology achieves this simplicity without the use of complex mechanisms, intricate hinges or expensive motors/controllers typically associated with other competing solar array technologies. The ROSA solar array, when configured for launch, stows into a compact cylindrical volume yielding efficient space utilization. The unique ROSA stowed configuration is able to allow extremely large solar array deployed areas to be stowed very compactly for packaging within launch vehicles because its solar cells are mounted on an innovative rollable modular flexible blanket which is much thinner than traditional rigid panel solar arrays currently in use. SSL, a Maxar Technologies company, of Palo Alto, California is currently flight-qualifying and implementing DSS’s ROSA technology onto SSL’s heritage commercial satellite platform, enabling higher spacecraft power, enhanced payload capability, and improved solar array performance and affordability. ROSA is also currently being implemented on other proprietary flight programs with other customers, and is baseline on numerous proposed missions.

A photograph of the ROSA solar array deployed on ISS is shown above. A video compilation of the ROSA spaceflight demonstration mission is available at the following link: vimeo.com/226383484