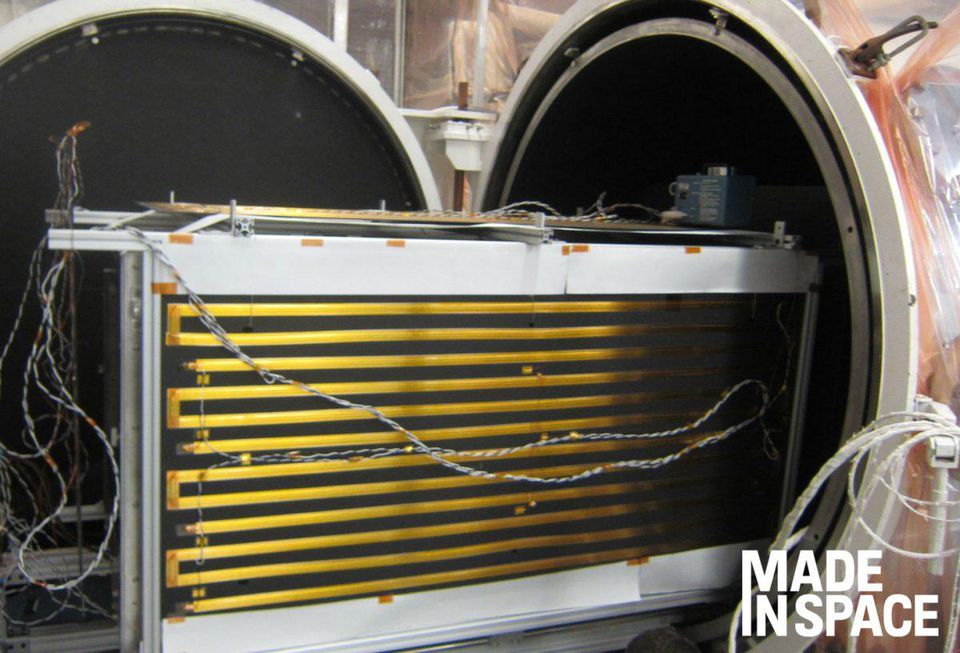 The Made In Space Archinaut program has accomplished another exciting milestone. During recent testing at Northrop Grumman’s Space Park facilities in Redondo Beach, California, we successfully operated Archinaut’s core additive manufacturing and robotic assembly technology suite in a space-like environment. These operations took place in a thermal vacuum (TVAC) chamber, simulating the extreme temperature and vacuum pressure of what a satellite in Low Earth Orbit (LEO) would be exposed to. The completion of this ground-based testing raises the technology readiness level (TRL) of the Archinaut platform and demonstrates that core Archinaut technologies are now prepared to operate in space.

I’m proud of the progress our #Archinaut program has made. These additive manufacturing & robotic assembly capabilities have the potential to transform space infrastructure. Great example of public-private partnership supporting space commercialization! https://t.co/1kb96ST9y6

The Archinaut platform looks to provide mission critical, space-optimized structures on orbit that would otherwise be too large to launch, using on-demand, adaptable manufacturing. With the marriage of additive manufacturing and robotic assembly, Archinaut enabled structures can range from:

Previous work on Archinaut’s power system and our extended structure manufacturing and robotic system has greatly contributed to this current progress in our Archinaut Program. Last year, we announced the development of Archinaut’s power system that could have significant benefits for small satellite development. The power system being developed can initially provide up to five kilowatts of solar power and is enabled by our Archinaut in-space manufacturing and assembly technology.

Additionally, the successful testing of our Extended Structure Additive Manufacturing Machine (ESAMM) subsystem in August 2017 marked a significant milestone on the path to manufacturing systems and satellites in space. The ESAMM hardware manufactured the first-ever extended 3D-printed objects in a space-like environment, producing a beam structure measuring over 30 meters in length.

These key development milestones are advancing our Archinaut program and bringing us closer to realizing the vision of in space manufacturing. The ability to manufacture complex, large-scale structures in space will be a critical enabler of a robust space ecosystem.